October 30, 2017
As a parent of two children making their way through math education, I have the privilege to talk with them about learning on a regular basis.  Sometimes it's at the dinner table when I throw them a neat question to think about and sometimes it's in the car driving to hockey/baseball/guides/whatever.  Talking about education with my kids is one of my favourite things to do and they really seem to enjoy it too.

The other evening, my daughter Megan took out a worksheet that she had been working on in her grade 6 class.  The students' task was to identify lines in 2-D shapes that were either parallel or perpendicular and they were to sort these shapes based on their geometric properties.  I'd imagine this type of activity is fairly common in Ontario as these sorts of comparing and sorting activities are written as part of our grades 1-8 mathematics curriculum.  While talking to Megan about her school work, I noticed her notation on figure G indicating that the lines were parallel: 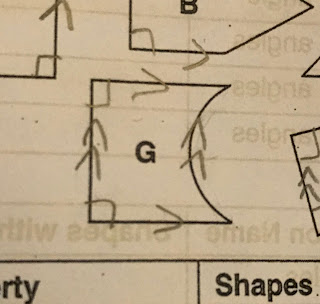 I asked Megan about figure G and she said that the two "vertical" lines were parallel because they were two lines that will never touch.  She explained that the straight line would continue running straight up & down and the curved "line" would continue in a circle, they'd never touch and were therefore parallel.  I thought this was somewhat odd as the term parallel is first introduced in grade 3 in Ontario, surely her definition for parallel-ness would have been tripped up at some point over the past 3 years.

Megan and I had a bit of a conversation about her thinking but then I decided to throw it out to Twitter: 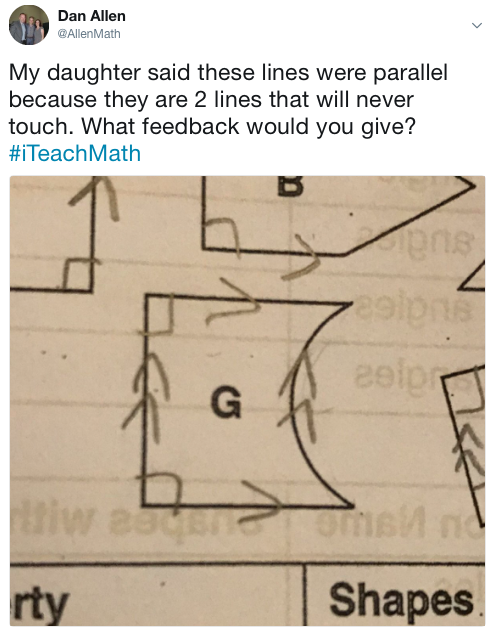 Having a modest Twitter following, I thought I might elicit responses from my usual cast of colleagues in the education world but I did not expect the amazing response that it got.  Many were originally focused on explaining to me why she was wrong but that wasn't the question that I asked.  What feedback would you give this child, aside from "right" and a pat on the head or "wrong" and send her back to her desk?

What came next was a rich mathematical conversation about parallel-ness of lines, what is a line and what is not a line, rules that we give students, and non-Euclidian geometry.  The whole time, Megan and I watched my timeline and had great conversations about learning and mathematics. 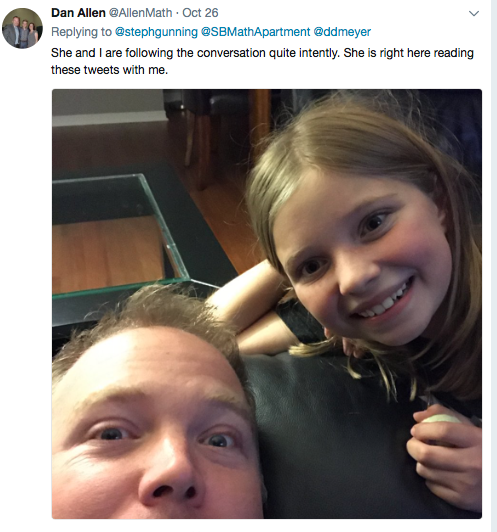 Here are some of my favourite tweets, responses, challenges and debates:

What do we even mean when we say "line"?  Do students make these distinctions? 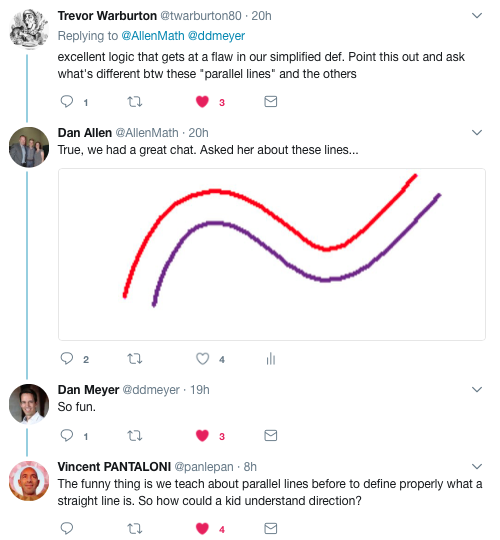 We had great exchanges between educators, mathematicians and others who weighed in on the definitions we use and their limitations: 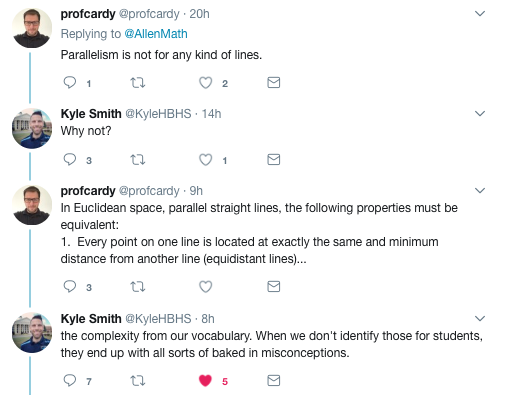 We had suggestions of expanding our mathematical vocabulary to include "curviparallel": 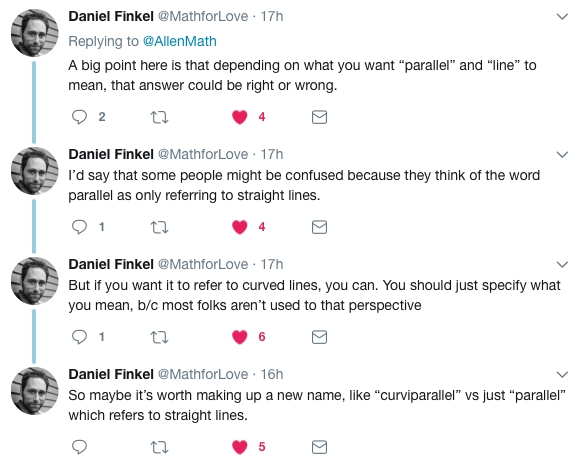 When we talk about parallel, are we limiting ourselves to 2-dimensions?  What happens in 3-D? 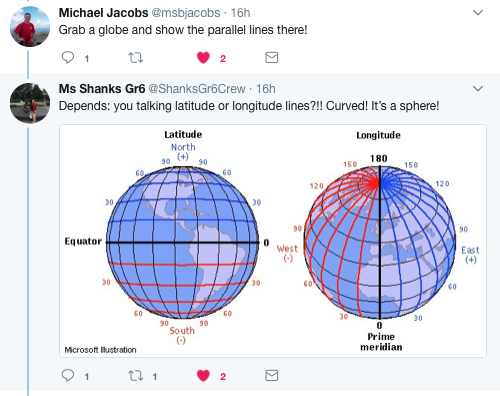 We had debates about the correctness of her answer: 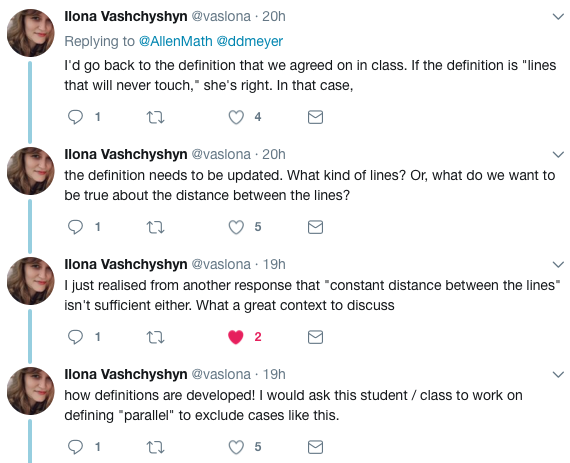 And there were great questions about the limitations of the definitions that we assume students know and understand: 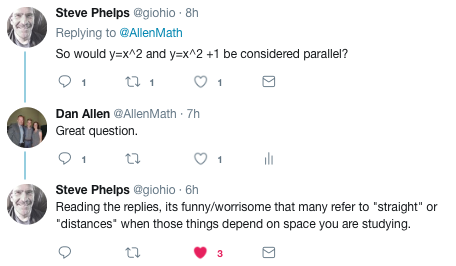 I was curious to see what Professor Google had to say about the word parallel as I'm sure many parents and students would begin (and end) their search there.  Here is what I found: 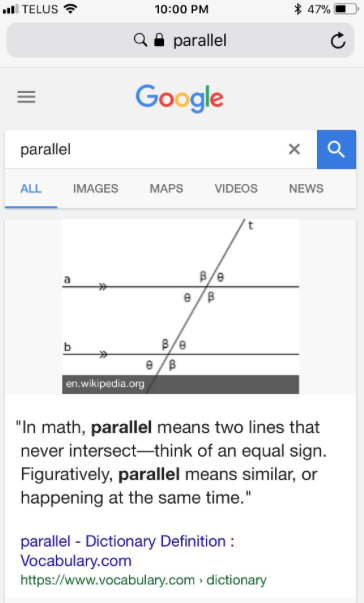 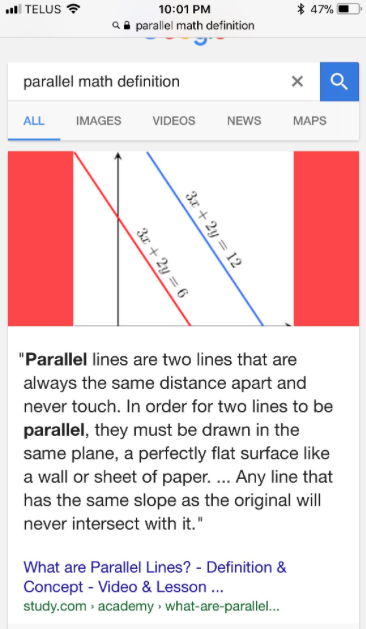 Oddly enough, both of these definitions contain the same misconception that my daughter had about two lines that never touch.   I also had a look in the glossary of the Ontario Grades 1-8 Mathematics Curriculum and here is what I found:

Here are my current take-aways from this experience.  I'm sure there will be more to follow as I have more time to process my thinking:

2.  Assume nothing.  My daughter is an excellent student and should be familiar with the concept of parallel-ness because she first learned it in grade 3 and has been working with it for three years.  Assuming students have a complete understanding of mathematical terminology opens us to allowing misconceptions to go unnoticed.  Getting students to talk about math and exploring incorrect answers is a really important part of learning.

3.  Examine our own biases.  I have a degree in mathematics, but my area of focus in my coursework was in advanced statistics.  Admittedly my understanding of geometry, though not too bad, is not at the level of many who joined in the conversation about a grade 6 student's math worksheet.  I had never really considered talking to her about hyperbolic geometry or circles with their centre at infinity but as a result of the learning that took place, we talked about these things! 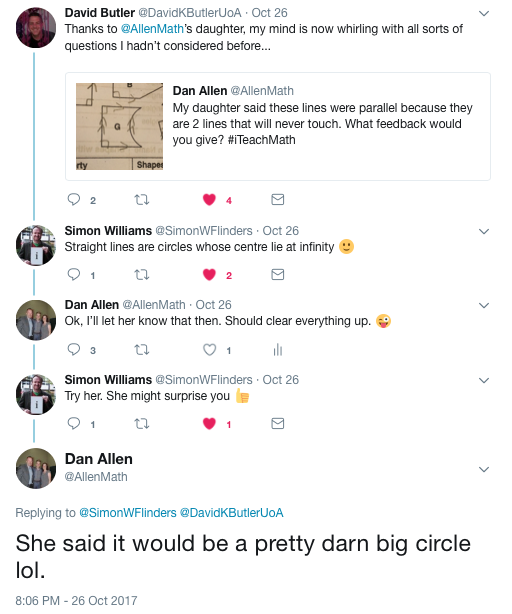 4. Saving the best for last, we continued this conversation all weekend and will continue to do so in the future.  I love to learn and I love to talk with children about mathematics, be it my own or my students.  This experience has my mind buzzing about many things and I thank the almost 30000 people who had a look at an 11-year old's math homework and those who took the time to share their thinking!
children education geometry mathematics ontario parallel parenting students twitter

Popular posts from this blog 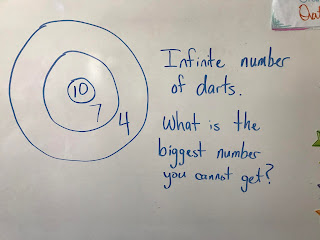 Hitting the Bullseye During a recent scan through my Twitter feed, I came across a tweet from Megan Hayes-Golding ( @mgolding ) about a problem she had shared: The original problem came from LC Dawson ( @CDawson ) that I had missed when it was originally shared on April 10: I loved the simplicity of the problem and thought it was very accessible mathematically but still promoted thinking, problem-solving and mathematical reasoning.  This problem can easily be adapted to allow for more challenging or easier versions and students can make their own to share with a friend.  The other thing I liked about this is that though students might have the mathematical tools to solve the problem, they probably had never seen anything like this before.  Solving non-routine problems in mathematics class is important because students can very easily fall into the trap of being good "problem performers" and not good "problem solvers".  More about that here from the
Read more 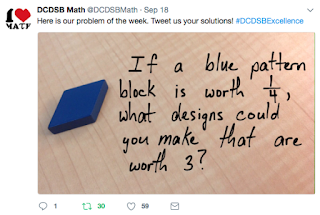 This past week, I had the opportunity to learn with the principals and math leads from our district's K-8 elementary schools.  Part of the learning we did that day was building content knowledge for teaching mathematics.  In our district, we have been doing a lot of learning around making connections between concrete, diagrammatic and symbolic mathematics (my colleague Mike Jacobs blogs about it in detail here , here , here , and here  and in other places on his blog ).  The concrete-diagrammatic-symbolic continuum has had a big impact with our students and helps them develop a deeper understanding of mathematical concepts.  When Mike and I were asked to share a couple of mathematics activities with the group, we thought it would be a great idea for them to do some thinking with pattern blocks as they're a readily available resource in our schools. We began by tweeting an appetizer on Monday from our board math Twitter account, @DCDSBMath: As far as tweets from the @DCDS
Read more